Improving a Mi'kmaq community for the next seven generations

Seven years ago, Chief Sid Peters made a gamble – he resigned from his established career in exchange for uncertainty and five months with no salary and started campaigning. All for a shot at running for Chief of Glooscap First Nation.

“It was quite a risk really,” recalls Chief Peters. “Our two kids were still at home, not to mention, I wasn’t completely sure I even wanted to be Chief.”

Glooscap First Nation was formed in 1982 with a mere five families. The relatively new Mi’kmaq band was created to provide support to those living off-reserve. The reserve is one of 13 in Nova Scotia and sits on 400+ acres of land, just outside of Hantsport, NS. Chief Peters father, Joseph, was Chief of the reserve from 1989 to 1996.

Following in his father’s footsteps, Chief Peters’ campaign efforts paid off. He was appointed the fourth Chief of Glooscap First Nation in April 2012. Chief Peters is currently in his second term.

“Glooscap itself was in pretty rugged shape at that time,” says Chief Peters, who resides in Masstown, NS, with his family and is considered an off-reserve band member. “The community had become a retirement area, with no one new coming on to the reserve. There were numeration issues, resulting in little revenue or funds to support the community.”

With that in mind, Chief Peters didn’t just ease into the position gently. Upon taking office, he immediately sliced his own salary, as well as those of his three Councillors. The result – the ability to hire more staff to run the community properly, allowing himself and the Councillors (who are also elected members) to focus on policies, procedures and high-level efforts. “The Councillors and I put in the hours, focusing on strategic planning, while the staff keep the community going,” says Chief Peters. The salary reductions also allowed for funds to be added to the small pot of existing money committed to Glooscap by the federal government, providing programs and support to the community.

He quickly built a number of new houses, encouraging young families to move back on reserve. On a smaller scale, he added community mailboxes. “No one visited Glooscap. People didn’t feel like you could come here, or even drive in to our convenience store. I wanted our community to be welcoming.”

While clearly proving transparency and accountability were important to him from the get-go, Chief Peters set his focus on economic development for Glooscap. “My mandate, from the beginning, has always been to make people proud of who they are and where they come from. I want them to be proud band members of Glooscap, just like I am.”

Glooscap Ventures was formed. The economic development arm of Glooscap First Nation, Glooscap Ventures, is an independent cooperation, creating business opportunities that will deliver revenue and employment to Glooscap First Nation and its members. Glooscap Ventures currently manages the on-reserve store, gaming facility and commercial fisheries, which includes Yarmouth Bar, a fisheries facility in Yarmouth, NS. In the works is the final development of Glooscap Landing, 25-acres of land, just off highway 101, which currently houses Tim Hortons, a gas station and retail space. Opportunities in renewable energy and a new fish processing facility in Yarmouth are also in the works.

“Part of making our community thrive means being involved with the communities around us,” says Chief Peters. “We can’t do this alone; we are a small community.” Chief Peters ensures regular connections with the Town of Windsor, the Town of Kentville and the municipality. “We all have to work together to create opportunities.”

And while Chief Peters has made great strides in economic development for Glooscap, resulting in positive changes for the band members, he doesn’t have any airs of being superior. “We want Glooscap to be sustainable, but we also want to help the other Mi’kmaq communities outside of Glooscap. Some are in rough shape.”

A second priority for Chief Peters is education. “Education is so important to Glooscap First Nation,” he says. “We are very proud that 29 per cent of kids in the Glooscap band are enrolled in post-secondary education.” Part of Chief Peters role involves active participation on the Mi’kmaw Kina’matnewey board, an education authority for the First Nations.

A spin-off to Chief Peters’s commitment to education is a future focus on professional services. “I’m tired of Aboriginals only doing retail and menial jobs,” he adds. “Our kids are becoming more and more educated; some are even becoming doctors. We need to work with them and create opportunities.”

While Chief Peters has without a doubt made drastic improvements to the band members of Glooscap First Nation, there has been some uncertainty.

“Over the past seven years, we’ve had to be careful our people don’t become too dependant on our community,” he says, adding that if they are not cautious of this, it could lead to bigger problems. “We need to shift away from the stigma of entitlement.”

A big part of Chief Peter’s success moving Glooscap First Nation forward could be attributed to a skill he may have inherited from his father. “Dad was very much a people person. He believed in helping others, getting into the community, visiting elders and seniors on a regular basis.” While there is no such thing as a typical day or regular schedule for Chief Peters, he always makes sure he has time for the community members themselves.

“I may not always be here, in the community, but I am always accessible and working,” he says. “And when I am on-reserve, I have an open door policy and visit our members as much as I can. The elders are particularly important. They are why we are here.” Chief Peters adds that his day is simply about figuring out how to best support the community and see it thrive.

Perhaps the greatest key to Chief Peters’ success is his mindset. “In the Mi’kmaq world we talk about seven generations of family. With everything I do, I assess how it will impact the next seven generations. I want to know the future impact with every decision I make.”

Improving a Mi'kmaq community for the next seven generations 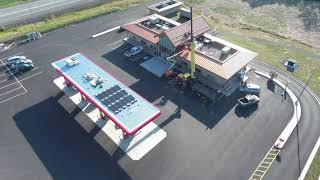